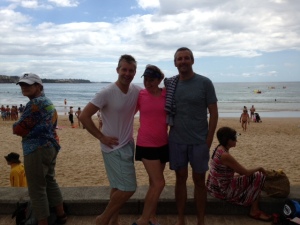 The best swim of the season so far

I would have completed one event less if Alan hadn’t thrown out the idea of completing the Manly Oceanswim.

We had Al Sheehan’s 40th birthday on Saturday night at the Sheaf so I suspected I would be slightly worse for wear on Sunday morning.

I didn’t publicise this event, but registered online on Saturday morning.

Saturday night was big and everryone was in great form as we helped Al Sheehan move in to middle age! A travesty of major proportion that Al Sheehan never wore the number 10 jersey for Ireland!  Hennessy reckons he was the best outhalf he ever saw – better than a certain ROG and another young lad now plying his trade in Paris.

I was greeted to the sound of rain as I woke on Sunday morning. Luckily Niamh had allowed me a lie-in.

I threw out the text message to Alan hoping it would be (a) ignored (b) hoping Alan had decided to stay in bed and cancel due to rain.

Alan responded that he would be round in 15 mins and we were on.

Walk in to Manly

As we walked around the corner from Fairy Bower in Manly and caught the first glimpes of the sea we both prayed for no swell. Thankfully conditions were perfect.

We were also running out of excuses to cancel the swim.

As with all of these events when you are waiting around, Awe wondered why we couldn’t just do the 1k event. That would be enough. Thankfully we made the right choice.

A quick coffee boost also helped settle the head and get a bit of energy.

It was all very relaxed as we waited for the swim to start. Alan and I were in doing a bit of a warm up and we had to frantically swim out of the way of the first wave of starters.

The water temperature was beautiful – around 21C. We swam out towards the first buoy about 200m offshore and then took a right turn for Shelley Beach. The buoy at Shelley was easy to spot. That didn’t make it any closer! I’d imagine that leg was about 900m. I was lucky enough to get in to a good rhythm and felt ok in the water. Another right turn at Shelley beach where I copped an elbow to the head going around the buoy.

The next section to Fairy Bower was that weird sensation you get when you are swimming, but the sand ain’t moving beneath you! This was a tough section of the race, but really spectacular. The water was really shallow and the rocks and fauna were wonderful to see. I know becuase I spent enough time staring straight down, apparently not  moving anywhere!

Managed to tough it out and get back in to a good ryhthm. Felt strong, for the first time this year as we swam back towards Manly and a left turn to the left buoy as we swam towards the finish at Manly beach. Got in to the beach ok and a strong run to finish in 29:10.

Very pleased with that! Think we got a bit of help with the currents 🙂 Alan came in at 32:01.

Ursula and the lifesaving sausage sandwich

Ursula came down to greet us at the end and rapidly produced three sausage and egg sandwiches. I almost bit her hand off, they were that good!

Huge thanks to Urs for the timeliness of her support for us and for all the energy she brings to our 4040diabetes.com challenge. 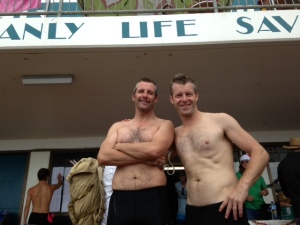 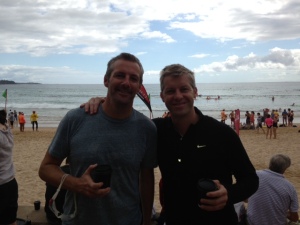 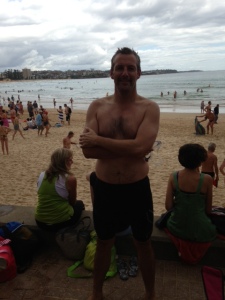